Regional Highlights
Central America and the Caribbean continue to be used as transit areas for drug trafficking from South America to North America. Approximately 90 per cent of the cocaine in the United States is trafficked via Mexico. Some Mexican drug cartels, under pressure from Mexican law enforcement authorities, have moved their operations to Central America, employing increasing levels of violence. In 2010, Honduras, Costa Rica and Nicaragua were identified for the first time as major transit countries for smuggling drugs primarily destined for the United States. Drug trafficking has become an important driver of homicide rates in Central America and is the single main factor behind the rising levels of violence in the sub region.\

The illicit cultivation of cannabis plants in Western and Central Europe has increased dramatically. Cannabis plants are increasingly cultivated on an industrial scale, mainly indoors, and with the involvement of organized criminal groups. Europe remains the world’s second-largest cocaine market. There has been diversification in the routes of cocaine trafficking to Europe, with increased trafficking via North Africa. The volume of cocaine seized by customs authorities in Eastern Europe rose dramatically in 2010. The Board remains concerned about the variety of substances abused in Europe, which continues to grow. Results of a 2011 survey of young people aged 15 – 24 showed that five per cent of respondents had abused substances that were not under control. In 2010, a record level of new substances were identified, many of which are not under international control. Europe accounts for the largest proportion of the global opiate market, and the abuse of heroin is the biggest drug problem in Europe in terms of morbidity and mortality.

West Asia remains the epicentre of illicit opium poppy cultivation and significant increases in opium production occurred in 2011. The combination of spreading opium poppy cultivation in provinces in Afghanistan, a substantial increase in the farm-gate price of opium, and planned decreases in the International Security Assistance Force (ISAF) could lead to even further increases in production beyond 2011. This is of great concern to the Board, particularly in a region which already suffers from some of the highest levels of abuse of opiates.

The trafficking of cocaine from South America through Africa and into Europe has emerged as a major threat in recent years. West Africa continues to be used for the trafficking of cocaine with drug traffickers increasingly using shipping containers and commercial aircraft to smuggle cocaine into the region. Heroin enters the continent through East Africa and is smuggled, either directly or via West Africa, into Europe and other regions. In 2011, record seizures of heroin were effected in Kenya and the United Republic of Tanzania. The Board is particularly concerned that the increasing flow of heroin into Africa has led to increased drug abuse throughout the region, particularly in East Africa and Southern Africa.

In the West, the 1956 Treaty of Rome (now currently dated to 1957) sponsored behind the scenes by the Socialista Internationale in Rome (The World Wide Communist Body Politic and Subversive) with the full complicity of the Vatican, arrived in force to subvert all world governments to bring in the New World Order. On their agenda was/is many items, several items of which are: destroying Arab Governments in the Middle East and bringing in the Zio-Communist dictatorship of "Israel" over all the Middle East, totally Socializing the American continents - North and South, destroying African unity and supplanting it with Western Economic Military-Industrial hegemony, granting Russia dominion over European interests in Economy and Defense and using the United Nations to bring in a One World Government of Autocratic rule.
____________________________________________ 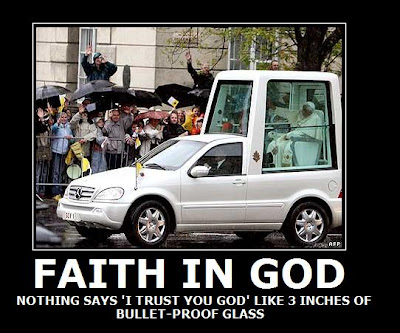 The Antipope Benediktos in his armored car makes me think back. I lived in and knew the coast area where Nixon moved to quite well before Richard Nixon moved there. I will give him this, where he moved to, he would come into town with nothing between him and the people on the street he would talk to and mix with. He really wanted to be liked for his own self and willingness to share that. At least that is part of what a leader should endeavor to have, popular support based on allowing people to know the leader for what he is. Nixon, in his early years, knew full well that the Jews were a knife in the back of this country. Nixon’s Juden ZioNazi Mephistopheles was Kissinger of course and that totally ruined Nixon and his administration. They still got rid of him for not doing more of what they wanted. I remember the Nixon Kennedy debates. Those who heard it on radio thought Nixon won. Those who saw it on television, where Nixon could not help sweating simply because of the hot lights, thought Kennedy won. If you read the text or just listen to their responses, there isn’t that much difference between the two of them. That takes on an even more sinister meaning when you consider that outgoing President Eisenhower directed his remarks warning about the Military-Industrial complex specifically to the ‘incoming occupant’ to the Presidency, which is how he put it – in other words, it wouldn’t have mattered who it was, Kennedy or Nixon, the NEXT PRESIDENT, unless he was a Sayan as crooked and useful to them as Bush or a Marrano as crooked and useful to them as Johnson – was MARKED FOR DEATH. If you look at the policies of both Kennedy and Nixon leading up to that time and Kennedy’s for his time in the White House, there wasn’t that much difference. Also, remember that Eisenhower stopped the British, French and Israelis COLD at the in 1956. In retrospect, the sword of Damocles that hung over the “occupant” of the white House was a putsch whenever the Transnational Zionist Jewry decreed it, if they could carry it off. If the three Corsican hitman (Angeletti, Chiappe, and Sarti – with assistance and management from others) who assassinated Kennedy had failed, there is no doubt the first nuke that obliterated something would have been right on Tel Aviv. Dimona and other parts of occupied would have disappeared as well. From 1958 to 1963 there was a Communist Judeo-Mason putsch in the that ended all Catholicity there and made it a pawn of Transnational Jewry, at the same time period the Presidency of the , with Kennedy’s assassination and the Marrano Johnson taking office, became a captive of ZioCommuNazi IsraHell. Nixon blanched and fell beneath the weight of this, when his time came. It was all downhill after Kennedy.

Posted by SntMartyr at 9:08 AM

Email ThisBlogThis!Share to TwitterShare to FacebookShare to Pinterest
Labels: Africa, Drugs used for the rise of the Antichrist via Vatican and Zionism