"Truth Will Set You Free"

What is raised by this article still has to be addressed.

'Truth Will Set You Free" 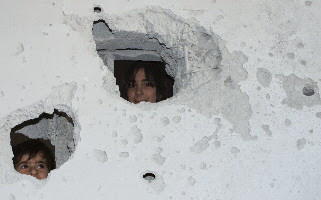 By May Khodr for PalestineChronicle.com

In 1948, my parents, Christian Palestinians, from the Palestinian village of Kfir Birem were given only moments by the Jewish army to abandon their homes and land, to make room for Jewish immigrants. My parents joined the entire inhabitants of the two Christian villages of Kfir Birem and Ikrit who were forcefully evicted and driven out of their homes, lands, and their ancestral history to begin a long foot march toward southern Lebanon with only the clothes on their backs, their children, and the keys to their homes

Such was their beginning and the beginning of hundreds of thousands of Palestinians whose future of poverty, neglect, denial, and refugee status still continues to this day. Their names, faces, stories, and dignity have been forgotten by a world obsessed by the Jewish story of World War II and not by the Palestinian victims of the Holocaust victims who deliberately committed genocide and ethnically cleansed my parents and the entire Palestinian people.

Unlike my parents who died in a strange cold land away from the soil they loved and tilled, the Jews demanded the world "Never Forget" their suffering while denying all of us Palestinians the story of our suffering. The cruel, unexpected and shocking irony of both people’s history is that the long history of Jewish persecution in Europe ending with the Holocaust sadly did not soften the Jewish heart or fill it with compassion, but rather turned their hearts to stone allowing them to become the persecutors of Palestinians.

The founding of Israel at the expense of the entire Palestinian population has been called by Israeli historians, Israel’s "Original Sin". My parents were told by Jewish soldiers they could return in 15 days. Fifteen days and 53 years later my family and millions of Palestinians are still living in refugee camps, in poverty, despair, and total neglect by a world intimidated by "Anti-Semitism" and America’s pandering to Israel. Initially the Arabs in 1948 refused the U.N. partition of Palestine into a larger Jewish State and smaller Palestinian State, who wouldn’t, but in 1949 they did accept the plan but Israel refused.

There would be no Israel if it weren’t for American money, weapons, United Nations Vetoes, and total media bias. Truman’s recognition of Israel against the advice of his cabinet to gain Jewish votes decided the fate of millions of Palestinians.

Where is the outrage of Christian America when Christians in the Holy Land are facing death, destruction of their homes, immigration out of the Holy Land, and most outrageously, Israel’s attack upon Bethlehem and upon the Church of the Nativity? Tragically, even the Christian Bell ringer of the Nativity church was shot dead by an Israeli sniper. Since Israel’s founding in 1948 Christians went from twenty percent of the population to less than two percent due to Israeli occupation and injustice. Sadly, most Americans don’t even know that Palestinian Christians live in Palestine under Israel’s occupation.

Read what Chris Hedges, former New York Times MidEast Bureau Chief wrote in Harper’s Magazine, October 2001 issue, page 59: "I have seen children shot in El Salvador, Algeria, Guatemala, Sarajevo, but I have NEVER before watched soldiers (Israeli) entice children like mice into a trap and murder them for SPORT". (Seven Days in a Palestinian Refugee Camp).

Due to our media bias only America supports Israel’s occupation while the entire world recognizes the Palestinians as the victims of Israel’s founding and demands an end to occupation. As an occupied people Palestinians have the legitimate right as declared by International law to resist occupation.

While Israel has the fourth largest army in the world, Palestinians only have rifles, pistols, and their bodies to fight for their independence. Our media focuses only on "Palestinian suicide bombers" but ignore Israel’s long history of terrorism against the Palestinians, the British, other Arabs, and even Jews, such as committing murder, assassinations, house demolitions, burning of farm lands, uprooting olive trees, evicting families to make room for wider roads and swimming pools for new Jewish settlers, destruction of hospitals, orphanages, elderly homes, and even bombing the only United Nations run school for blind children who couldn’t run to escape the bombs.

In this Intifada, 1,400 Palestinians, mostly civilians with a third being children, with 30,000 injured compared to 400 Israeli dead, mostly military, with 250 injured. While Israeli victims are shown on TV grieving for their loss, Palestinian victims are simply statistics with no face and no names.

The United Nations has passed over 60 Security Council Resolutions that Israel ignores due to America’s support demanding an end to occupation and human rights abuses against the Palestinians. For 53 years Israel has said NO. For 53 years Israel has told the world including us, the American taxpayer, who’ve given Israel $134 Billion since 1949 (about $17 million a day), to go to hell. While Bush demanded Israel withdraw its invasion of Palestinian cities, Sharon’s response was to invade Hebron. So far and for four days, Sharon has told our President and nation to go to hell.

No other nation has such control over our government and national interest. For 53 years, Palestinians have been forgotten, neglected, and demonized by our Pro-Israel government and media. Israel has been the wedge between us and the rest of the world, especially the 1.3 billion Muslims who before Israel’s establishment never harmed any American. People don’t hate Americans, they hate American policy that is run by powerful special interest groups, like the powerful Jewish lobby in Washington that ensures we support Israel right or wrong.

I was in Beirut in 1982 working in the American Hospital’s emergency room when Sharon surrounded the city, turned off its electricity and water, and destroyed everything in site. Daily for 3 months I saw Sharon’s victims, from fathers looking for their wives, mothers looking for their children, a child with his guts out laying on an a stretcher alone, and a man’s foot that dropped when I touched it. For his allowing the slaughter of 2000 Palestinian men, women, and children over 3 days in Palestinian refugee camps, even Israel condemned Sharon while now in Belgium he’s being tried for war crimes. Sharon’s invasions have more to do with protecting the illegal Jewish settlements than protecting Israel’s security.

Israel’s history of terrorism includes using the first car bomb to kill civilians and hijacking the first plane in the region. Israel is the only nuclear power in the region. Israel is the only occupier of another people in the region. Our government and media protect Israel even when it attacked our navy ship, the USS Liberty, in 1967 killing 34 Americans and wounding 171. Our tax dollars are paying for the Holocaust Museum in Washington D.C. while not one cent of our taxes was given to build a memorial for our brave World War II Veterans.

The silence of American Christian toward Israel’s policy against Palestinian Christians is shameful. Christians can’t even enter Jerusalem to pray in their churches. Why are our politicians, clergy, media, and citizens silent about the plight of Christians in Palestine? Are we afraid or simply don’t care? Jesus taught us to face truth and injustice anywhere, but obviously not if it goes against Israel.

I grieve for Israeli and Palestinian mothers who bury their children because of the impotence of politicians and the silence of the world. Americans in due time will learn the truth and injustice Palestinians have endured for 53 years. As Christ said: "Truth will set you free". Even thousands of Israeli soldiers and commanders are discovering the "truth" about Israel’s illegal settlements and occupation and prefer going to jail rather than killing one more Palestinian.

I ask all Christians to awaken from their silence and be free from fear and guilt. Abraham’s children are dying because of our government’s fear of Pro-Israeli votes, money, and media power. Let’s all pray for God’s guidance and mercy that we may stop the shedding of blood in the land of Christ’s birth. Please tell our President and Congress to stop our billions of dollars in aid to Israel until it seeks peace and withdraws from all occupied territories it captured by force in 1967. The entire Arab League and Arafat have accepted this solution. It’s time Israel abided by international law and respect for Christian and Muslim lives and sanctuaries.
Posted by SntMartyr at 7:54 PM

Email ThisBlogThis!Share to TwitterShare to FacebookShare to Pinterest
Labels: "Truth Will Set You Free", Christian Palestinians, May Khodr for Palestine Chronicle