The Justice of God: Palestine Cry: Europa & Palestine News « Kawther Salam: US Defense Minister and The Dirty Task to Launch a Mossad Agent

The Justice of God: Palestine Cry: Europa & Palestine News « Kawther Salam: US Defense Minister and The Dirty Task to Launch a Mossad Agent
_________________________________
See also this:
Here is the Hegemony, basically speaking:
At the top are the Transnational _Power Brokers centered on Guelph Bavarian _Nazi Occultism and its Evil Sister twin Zionism - In short, the Bavarian _ Illuminati. (The Freemasons and the London Bankers and many others all depend from that.)

OUR CONSTITUTIONAL LAW VERSUS THE ILLUMINATI 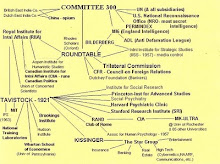 click on picture
Underneath that, is the Military-Industrial Economic Transnational Infrastructure

A great number of brave and honest Police and Judiciary, which is always the rule, have stood against the following. May they continue to do that and and may all of us support them.

The idea that Britain and France and the United States and Russia and the League of Nations had any right to divide up the Ottoman Empire in any fashion because of a War started in Europe among Europeans is absurd. That this war, World War I, which the Europeans dragged the Ottoman Empire into via the slaving colonialization of the region by Europeans (especially Oil grabs and “Emirate” creation beginning in 1892) and a specious European “alliance” forced on the Ottomans, had any lawful bearing on the lawful dominion of Arabs over the region is as ridiculous as is any idea that the European troops, or any other, had any business carrying their vile internecine war into the region for any reason. World War I was financed on both European sides by Rothschild and other Zionist Judaist Bankers for the specific purpose of invading the Middle East and unlawfully pillaging the Holy Land of Christ belonging to the Christian and Muslim Arab people and steal it from them. This is being carried forth by the Triad of superpowers, The United States and Russia and Red China, into a vile excuse to conquer the whole world for the Pan European Illuminati New World Order.

The DIA, Defense Intelligence Agency (formed 1961), is part of the Intelligence Linkups that are part of the infrastructure in which is embedded the answer to the Cuban Missile Crisis (1962). That crisis was staged by the Illuminati New World Order and gave the reason (brinksmanship of World War III) for a permanent link up of the Defense Computers of the United States and Russia and Red China and anyone else in the Nuclear Club. There NEVER will be a Nuclear World War Three, unless the powers that be decide to have it happen. Those powers are already in total control of the Triad of the United States of America and Russia and Red China. They control the little Devil puppet Israel. Their high ranking minions are in control of the United Nations. Their center is the Pan European Illuminati. They already control all nuclear proliferation in the world. All the scare tactics about rogue Nuclear Powers and threats are a staged dog and pony show. They use this act of theirs to manipulate the whole world. They are the behind the scenes real movers and “powers behind the throne.”

Iraq was never a Nuclear Threat to anyone. Iran is not one now. For that matter, Israel (which does have 200 Nuclear warheads) isn’t a Nuclear threat, but they use Nuclear Blackmail, just like the big three do, to get their way in things. None of that happens except it is approved ahead of time.

Even the Central Banks don’t have ultimate power, they only have the power delegated to them by those who control these Nuclear National Military Infrastructures.

All Corporations and Industry, as well as the Banks, take their orders from these unseen International Militarist Power Brokers. Even the Intelligence Agencies of various countries, including the Triad, are permeated by these shadow dwellers.

On Freemasonry and the Illuminist-Judeo-Zionist attack on the Church.
See these two links.

THE WAR OF ANTICHRIST WITH THE CHURCH AND CHRISTIAN CIVLIZATION

THE PLOT AGAINST THE CHURCH 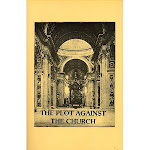 click picture for book
Posted by SntMartyr at 6:15 PM