The Egyptian community in Austria continued celebrations the 38 anniversary of the glorious victory of October 6 1973 war (“Ramadan War”, “Yom Kippur War”) in which the Egyptian Army defeated Israel, which had occupied the Egyptian land of Sinai and the Syrian Golan Heights since 1967, shattered the myth of invincibility of the zionist army which, freed the Suez Canal, crashed of the Bar Lev line and forbade the export of oil to the West. The celebrations which which have taken place in the Austrian capital are coordinated with the celebrations taking place in Egypt since the sixth of October.

The new Egyptian Ambassador to Austria, Dr. Khaled Shama and the Consul General of Egypt, Mr. Sherif Lutfi, attended a celebratory lecture organized and held under the auspicies of the Egyptian cultural attache, Dr. Morsy Abu-Youssef, at the cultural and studies department at the Egyptian Embassy in Vienna. (Click on the picture to see it bigger).

Sayed Hegab, a poet, writer and lyricist and Saad Hagras, author, journalist and bachelor of philosophy at the University of Cairo, gave a lecture on the theme “The October Victory – Significance and Meaning”. The speakers summarized the most important results of October war, in which Egypt regained full sovereignty over the Suez Canal and recovered part of the territory in the Sinai Peninsula. The war paved the way for the Camp David agreement between Egypt and Israel, which was held in September 1978 after the war and following the historic initiative of Anwar Al-Sadat in November 1977 and his visit to Jerusalem. The war also led to the resuming of shipping operations in the Suez Canal in June 1975.

During the October War, the United States and the Member States of the UN Security Council of the United Nations intervened and issued UN Resolution 338, which provides for cessation of all hostilities starting on October 22, 1973, and Egypt accepted the decision and implemented as it during the evening of the same day, but the Israeli forces violated the cease-fire and forced the UN Security Council to adopt another resolution on October 23, requiring all parties to the cease fire.

The speakers emphasized the relationship between the Egyptian armed forces and citizens in the success of the Egyptian revolution on 25 January of this year and the strength of those links as compared to other peoples of the Arab region living under similar conditions. Hegab read some of his poems and received warmed applause from the audience. 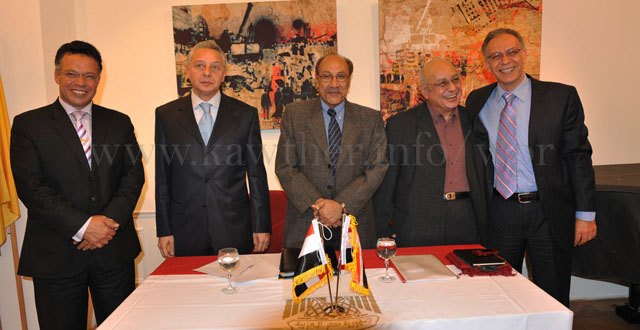 Mr. Hegab said during his speech that the worse thing which Egypt was forced to live through after the October Victory and signing the Camp David agreement was that the Egyptian regime was de-facto subjected to Israeli hegemony, and that even during the Hannukah Massacre of 2009 (Operation Cast Lead), the Israeli tanks were operating with Egyptian oil. He sharply criticized the peace treaty with Israel, and the policy of “economic openness” that has transformed Egypt from an agricultural country dependent only on its own production into a consumer market for foreign goods which is now flooded with foreign products which are of lacking quality and unhealthy, products which transfer the wealth of Egypt to Western countries, to big transnational corporations and a few of the rich Egyptians.

In a brief commentary on the criticism made by Hegab in his speech,

Ambassador Shama said that “we should not forget that the peace treaty signed by the late President Anwar Sadat has brought stability to Egypt and its people and has prevented wars”.

After the speeches of Mr. Hegab and Mr. Hagras, Ambassador Shamaa and Consol Lutfi left the Egyptian cultural department and moved to the nearby Egyptian Club, where Dr. Mostafa Talbi and many Egyptians who live in Vienna were celebrating the victory of October 6 1973 with songs and a dinner to commemorate this holy night in the history of Egypt. 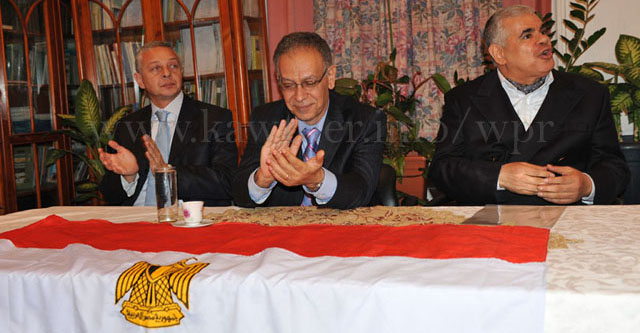 At the Egyptian Club things were much less formal. There were no borders between the Ambassador, Consul and the local Egyptian community. Sitting together in an amiable round, the embassy officials and the local Egyptians conversed and drank tea together, sharing memories of the October victory with some veterans of that war.

Four veterans of the October war were among the attendants at the Egyptian Club. They danced with Egyptian flag, sang old songs and told the audience about some of their memories. Dr. Mustafa Eltelbi, head of the Club together with the Egyptian Ambassador and Consul delivered certificates of appreciation from the Egyptian government to these war veterans before the audience. The veterans and the audience sang popular songs such as “The Land speaks Arabic” and then had a delicious dinner, an open buffet with traditional Egyptian food.

The zionist “state” of Israeli still remembers the October war very well. The war criminal Lt.Gen. Dan Halutz (דן חלוץ) wrote an article at the Hebrew edition of Maariv titled “The war … memory and lessons”, in which he said that the October War in 1973 had been “a difficult one”. He also said: “We were prisoners of our reality, in which we believed that we were stronger than our enemies, we did not doubt, there was no such word as “surprise” in our vocabulary or in our thoughts”.

Halutz also said in his article: “I was involved in more than 40 sorties in the

war, I still remember my and my colleagues troubles when we heard more than 15 times about the shooting down of airplanes and about the missing crews of our air force. I still remember how we were troubled after 14 pilots of our fighter planes fell into captivity in Egypt and Syria”. Further: “After the war, some of our fighters were not physically injured but they were affected mentally. No one believed what had happened”. (Click on the picture to see it bigger).

Posted by SntMartyr at 4:55 AM