Hammelek l Yisrael translates as [the false] 'king of Israel' with medial kaph signifying a short reign in keeping with the prophecy of Antichrist in Scripture.

Traditional Catholic Prayers: About the Truth that will set you free.: 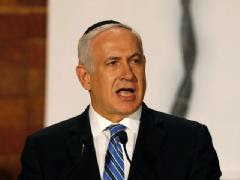 Wait and see who it is - The Apocalypse, the Book of the Revelation: 13:5 "And there was given to him a mouth speaking great things and blasphemies: and power was given to him to do, two and forty months."

The Justice of God: Traditional Catholic Prayers: False prophecy - terrible damage done and nothing else

There is no doubt that Binyamin Netanyahu is a mass murdering genocidal maniac and Satan worshipper, but as to whether he is the Antichrist, ad Dajjal, remains to be seen.

click on picture
God and His Messiah Jesus Christ our Lord - our right and duty to witness to Him: Allah subhanahu wa ta’ala through ‘Isa al-Maseeh in the Holy Spirit - Ruach Elohim, kannawn anawim Kyrie elieson Lord have mercy
The Apocalypse, the Book of the Revelation

The Apocalypse, the Book of the Revelation: 13.

The Beast of the Sea

Rv:13:
1 ¶ (12-18) And he stood upon the sand of the sea. (13-1) And I saw a beast [1] coming up out the sea, having seven heads and ten horns: and upon his horns, ten diadems: and upon his heads, names of blasphemy. … Scripture reference – Rev.: 11:7!; Dan.: 7:3; Rev.: 12:3; 17:3
2 And the beast which I saw was like to a leopard: and his feet were as the feet of a bear, and his mouth as the mouth of a lion. And the dragon gave him his own strength and great power. … Scripture reference –
3 And I saw one of his heads as it were slain to death: and his death’s wound was healed. And all the earth was in admiration after the beast. … Scripture reference – Rev.: 13:12; 17:8
4 And they adored the dragon which gave power to the beast. And they adored the beast, saying: Who is like to the beast? And who shall be able to fight with him? … Scripture reference – Rev.: 13:12; 17:8
5 And there was given to him a mouth speaking great things and blasphemies: and power was given to him to do, two and forty months.
6 And he opened his mouth unto blasphemies against God, to blaspheme his name and his tabernacle and them that dwell in heaven.