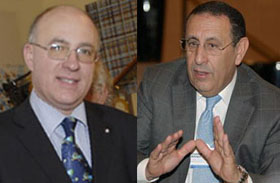 From left: H.E. Dr. Wolfgang Angerholzer and Youssef Amrani
Rabat, Morocco – the government cited the Austrian Ambassador in Rabat, H.E. Dr. Wolfgang Angerholzer for a conversation and condemned Austrian rightist party FPÖ after the Innsbruck fraction of the FPÖ used election placards describing Moroccans as “thieves”.
Youssef Amrani, Minister Delegate to the Minister of Foreign Affairs and Cooperation in Rabat, called Austria’s ambassador to express “the dissatisfaction of the Kingdom of Morocco and its condemnation of the racist events and the defamation towards the Moroccans citizens residing in the Austria, which is a member of the European Union”. 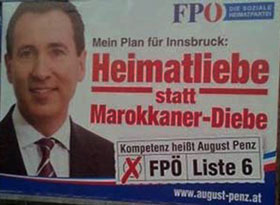 The public prosecutor in Innsbruck (in the West of Austria) announced earlier that he had opened an investigation against the right wing Austrian party FPÖ on charges of “incitement of hatred” following their use of placards hostile to Morocco during electoral campaign which precedes the municipal elections scheduled on April 15 2012 in Innsbruck.
The controversial slogan appeared on the placards of the candidate for the position of major, Mr. August Penz, stating in German: “My Plan for Innsbruck: Love for my homeland instead of Moroccan thieves”. The placards have apparently been retired after the initial scandal they provoked when featured on Austrian national TV.

Meanwhile, the Moroccan Ministry of Foreign Affairs has informed the Austrian Ambassador that members of the government of Morocco have decided to take part as civil parties in the court proceedings expected to take place against Mr. Penz, in representation of the Moroccan community in Austria.