All Jews must repent of the horrid attitude toward God and His Christ and Christian civilization that they have done everything they can to destroy, see here: Palestine Cry: Designs Of The Jews On Art And Architecture By Father Leonard Feeney - the Jews that do not will go to hell forever by Christ's command when He returns from heaven.

For there to be any peace in the Holy Land, the blasphemy against God and His Christ and the Holy Spirit must be renounced by all the Jews there: Jews called in Christ: The way out of the 18 temple benedictions and the unlawful subversion of governments by Jews must be ended: Jews called in Christ: Understanding the Synagogue of Satan, Zionism, Talmudism, Babylonian Cabbalism and the Apartheid wall in Palestine must be destroyed.

There is no other way. If it isn't done, shear destruction is the only future that the Holy Land will have. The faithful should leave at once and let the apostates sit there to be destroyed.


Traditional Catholic Prayers: Come out from amongst them and be ye separate saith the Lord Almighty 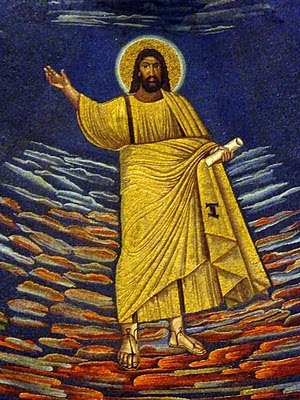 Be ye faithful and prepared to meet the Lord

The Apocalypse, the Book of the Revelation

2 CORINTHIANS 6
CHAPTER VI.
He exhorts them to a correspondence with God's grace, and not to associate with unbelievers.
14 Bear not the yoke together with unbelievers. For what participation hath justice with injustice? Or what fellowship hath light with darkness?
15 And what concord hath Christ with Belial? Or what part hath the faithful with the unbeliever?
16 And what agreement hath the temple of God with idols? *For you are the temple of the living God: as God saith: **I will dwell in them, and walk among them, and I will be their God, and they shall be my people.
17 *Wherefore, go out from among them, and be ye separate, saith the Lord, and touch not the unclean thing:
18 And I will receive you: *and I will be a Father to you: and you shall be my sons and daughters, saith the Lord Almighty.

Ver. 14. Bear not the yoke together with unbelievers. He does not mean, that they must wholly avoid their company, which could not be done, but not to have too intimate a friendship with them, not to marry with them, to avoid their vices. Be ye separate . . . touch not the unclean thing. He does not speak of meats, clean and unclean, according to the law of Moses, nor of legal uncleannesses, but what is sinful under the new law of Christ, and would defile the soul, as idolatry, fornication, &c. Wi.
Ver. 15. Such as have cast off the yoke of God are called children of Belial. John viii. 44. Belial, in its radical signification, means without yoke. V.
Ver. 16. The apostle here blames the too great affection the Corinthians had for the Gentiles, who sometimes invited them to their religious feasts, at which were eaten meats which had been offered to idols, and which gave scandal both to the Christians and Gentiles. To draw them from these feasts he tells them, that they are the temples of the Holy Spirit, and that consequently they ought not to make themselves the temples of devils, by eating of the sacrifices of devils. Calmet. — S. Paul, in this and the foregoing verses, clearly shews that the faithful ought not to frequent, on any account, the tabernacles of those who have left the Church, i.e. the true faith, such as those calling themselves the Novus Ordo or in other words, the New Order or New Sect - the New Church, for there is NO such thing; the Vatican II apostasy and all the antipopes thereof and their minions - John xxiii, Paul vi, John Paul i, John Paul ii, Benedict xvi and any other to come after them, we may have NOTHING to do with on pain of penalty of eternal damnation by the Just and True and Righteous and HOLY GOD. In the old law, Moses was ordered to command the ancients of Israel, on the part of God, to depart from the tents of those wicked men, lest they be involved in their sins. Numb. xvi. 27.


Patron St. Stephen Protomartyr ستيف في فيستاMay 29, 2012 9:34 AM
It is become increasingly clear that the Palestinians are only pawns to be used by any number of interests. All the Jews who had any conscience at all in Occupied Palestine, whether Sabras (born there) or not, started leaving in the 1980's. The obvious solution is for all Palestinian people to simply leave and go anywhere else. In about six months to 4 years when the world looks back in at what Occupied Palestine looks like when there are only the Jews and PNA left there for that length of time, what we will probably find is only rubble to be cleared and bodies to be buried. Cancer always finally destroys itself. I am quite serious, in preaching to the multitudes about the destruction of Jerusalem, which He foretold, Our Lord and Saviour Jesus Christ warned them to flee and not be there when the end came. The Christians listened and fled to Pella (East of the Jordan River) when Jerusalem fell and NONE of the Christians were harmed. The Perfidious and always bloody Jews where utterly destroyed by the Roman General Titus in 70 A.D. Jesus Christ speaking. Matthew 24:15 When therefore you shall see the abomination of desolation, which was spoken of by Daniel the prophet, standing in the holy place: he that readeth let him understand. 16 Then they that are in Judea, let them flee to the mountains: 17 And he that is on the housetop, let him not come down to take any thing out of his house: 18 And he that is in the field, let him not go back to take his coat. 19 And woe to them that are with child, and that give suck in those days. 20 But pray that your flight be not in the winter, or on the sabbath. There will be right of full return when the ZioNazis are all gone. Let God deal with this plague of locusts. Right now the Palestinians are only human shields for the ZioNazis. Don't be used that way.

Because of the resistance of the civilized Austrian people to Nazism due to their unadulterated Catholic faith (see Traditional Catholic Prayers), Hitler did all he could to bring Austria under Nazi dominion via Anschluß, but he could not change the people, and when the tyrant fell as all tyrants will always fall, the people remained who they always were before God. The Palestinian people will do the same thing.
Posted by Maritza at 9:14 PM

Email ThisBlogThis!Share to TwitterShare to FacebookShare to Pinterest
Labels: As in the days of Noah